We support U.S. Trustee Tracy Hope Davis in her fight to ensure that Tom Horton leaves American Airlines with no more than what the bankruptcy law dictates: “no more than 10 times the amount of the mean severance pay given to non-management employees.”

If you agree, please add your comment below in support of Trustee Davis’ fight to ensure that the bankruptcy laws are enforced thus preventing executives from being rewarded for taking money rather than making money.

“The objection filed Friday by the U.S. trustee’s office says bankruptcy law caps such payments, even if they are agreed to in bankruptcy court but not made until the company exits bankruptcy protection. Bankruptcy law limits severance payments to executives and aims to make sure companies can repay as much of their debt as possible.

The objection also says previous company filings showed that Horton would get a maximum of $6.4 million if he had left at the end of last year, and raises the question of why he should get so much more money now. American has said in filings that the money for Horton is in recognition of his efforts during the airline’s restructuring and his role in overseeing the merger with US Airways.

The trustee’s objection also says American should be required to explain how its board determined that $20 million was the right amount for Horton, and to say whether independent directors approved of the payment.

The trustee’s office is part of the Justice Department. Its job is to review bankruptcy cases to make sure bankruptcy laws are being enforced.” 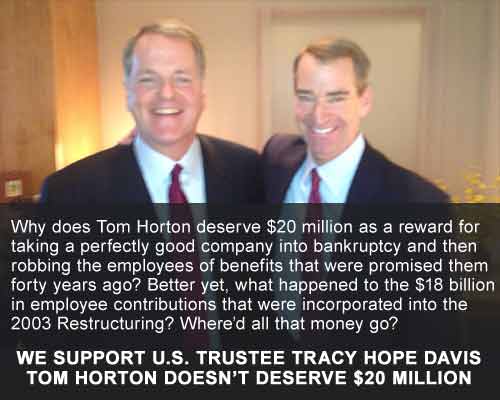 What the Media says: